How To Use a Recorded Conversation In Your Divorce

Many lawyers do not know how to properly use a recorded conversation in a divorce case for their client.  Here’s the deal:

Most divorce cases settle.  Most hearings are not well prepared for because most people do not have the money to pay heavy litigation preparation fees.

But, using a recorded conversation is easy, once you memorize this basic outline on how to do it.

Do not just bring a phone with a recording to court and hope that it will work out.

While I have seen recorded evidence admitted that way, you are risking that for many reasons it will not be admitted.  For one thing, you have no physical way of entering the recording into the evidence with the court.  You might be able to “publish it” but you can’t admit it and leave it in the file.

Do not try to wing it.  Plan out your steps to entering the recording, if it is important to your case.

Step 1.  Get the Recording From Your Client.

If your client used the “voice memo” app which comes freely on the iphone, then they can just email you the file.  You need to verify with your client that the memo was not modified in any manner, as this will be an authentication question during the hearing.

Step 2.  Have Your Client Send You a Screenshot That Shows the Timestamp of the Voice Memo

You are going to be entering the audio file, but if the timing of the audio file matters, you can have your client send you a screenshot of the timestamp that is taken when the voice memo was created.  This screenshot will be printed by your office and entered as an exhibit to show evidence of the time the memo was taken (again only if timing of the recording matters).

Step 3.  Put the Recorded File Onto a Thumb Drive.

Just buy some thumb drives and have them handy if you are practicing family law.  This will enable you to get the evidence ready for admitting right away, and will enable you to LABEL the exhibit with a sticker, and pick a letter, and just label the thing.  Having these details done right away empowers you, and gets your case ready. 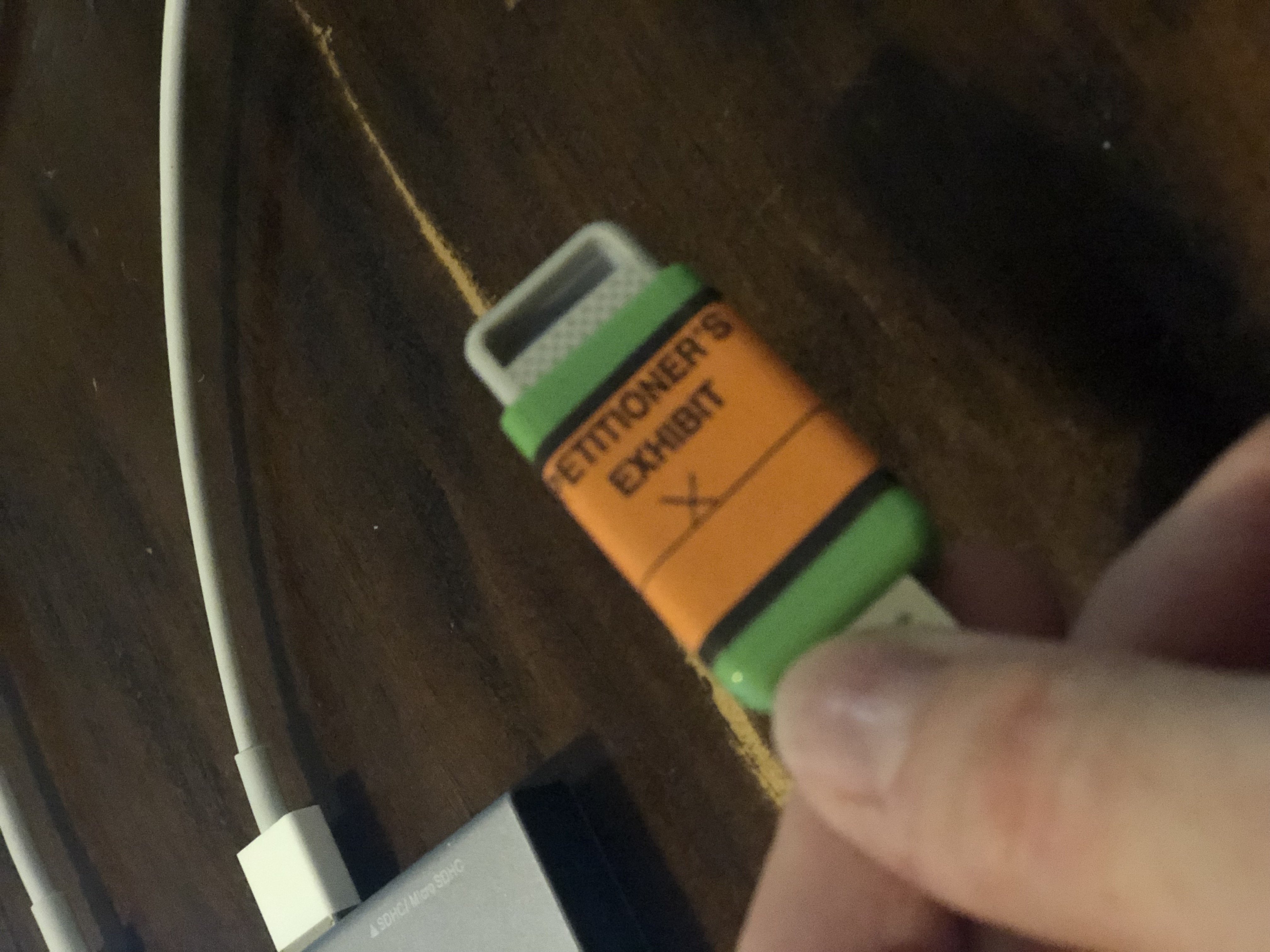 Step 4.  Practice Playing the Voice Memo On Your Computer Or Portable Speaker

You are going to have to publish this thing, in fast smooth order during your hearing, so practicing this part once is called for.  In courts that have microphones for the lawyer, you can just play it on your computer and put the microphone up to the computer speaker.

Step 5.  Get a Transcript Made of The Recording

The easiest way to have a transcript made is to play the recording from your computer WHILE recording it on an app that transcribes things on your iphone.  The best app for this is called “Otter“.  Here is their logo, so that you can easily find it if you want to try this out.

Also, you can do this Otter recording to be able to quickly READ the recording that your client has sent you, rather than slowly listening to it.  This can help you determine whether the recording will help the case before too much legal fees have been incurred transcribing it.

**You need a formal time stamped transcript of the recording. The otter version is just to help the paralegal make the real thing**.  She will follow along, listening to the recording and updating any errors that the Otter app may have made while creating it.

Step 5. Label the Transcript With an Exhibit Sticker & Plan to Admit it.

The Texas Rules of evidence allow a transcript of a recording to be entered to save the court time in reviewing this type of evidence.

The proponent may use a summary, chart, or calculation to prove the contents of voluminous writings, records, or photographs that cannot be conveniently examined in court. The proponent must make the originals or duplicates available for examination or copying, or both, by other parties at a reasonable time and place. And the court may order the proponent to produce them in court.

More in detail discussion of this is available at this link.

Step 6. Write the Predicate Script Into Your Trial Binder (or Cut and Paste This One)

You cannot just hope to ask the right predicate questions.  You need to plan them out. If you cannot overcome the obvious hearsay objection coming your way, or overcome the authentication objection that opposing counsel will lodge, you are not going to win the battle of entering important evidence.  The predicate / foundation questions for admitting a recording conversation into evidence are these:

Is this a voicemail?

Did it came from your iphone?

Did you make this recording?

You used your iphone to make the recording?

Is this a conversation between you and another speaker?

Do you recognize the speaker’s voice in this recording?

Have you heard it before?

Have you heard it firsthand?

Have you heard the voice often?

In your opinion did the voice on this audio recording belong to?

Has this recording been modified or changed in any way?

Step 7.  Read the Hearsay Exceptions and Figure Out Which One Applies.

When they object to hearsay, you should be ready to tell the court why it’s not hearsay or why it is hearsay but falls under the exception.  Most often “statement by party opponent” or “Then existing state of mind” will work.

Step 8. If You Did Steps 1-7, Pat Yourself on the Back For the Good Lawyering Work You Have Completed For Your Client.

(If you skipped all of the steps, good luck to you, I hope I see you in court on the other side of the table because I’ll be the one that is ready;)

A Friendly Divorce is Less $$$ and Less Stress.