Dan was a wealthy oil and gas business man

Before they got married, they signed a prenuptial agreement.

But, after they got married, they agreed to change their prenup’s terms.

The most important part of their prenuptial agreement stated that in the event of divorce,

Brenda would own their home, a 1711 acre ranch, 10 million dollars and any inter vivos transfers or testamentary transfers.  So, she would also own any gifts that Dan gave her before his death, or after.

During the litigious divorce, the couple proceeded to have a big dispute over what money was in fact Brenda’s.

In order to acquire necessary evidence to prove whether Dan’s money was gifted to Brenda, Dan hired a certified booking accountant and expert named Scott Turner.

Turner’s expert testimony and reports appear to have been a key aspect of Dan eventually winning the suit.

Turner testified at the divorce trial, before the jury, that Brenda made more than thirty money transfers ranging from $50,000 to $150,000 from Dan and Brenda’s joint account to Brenda’s personal account. 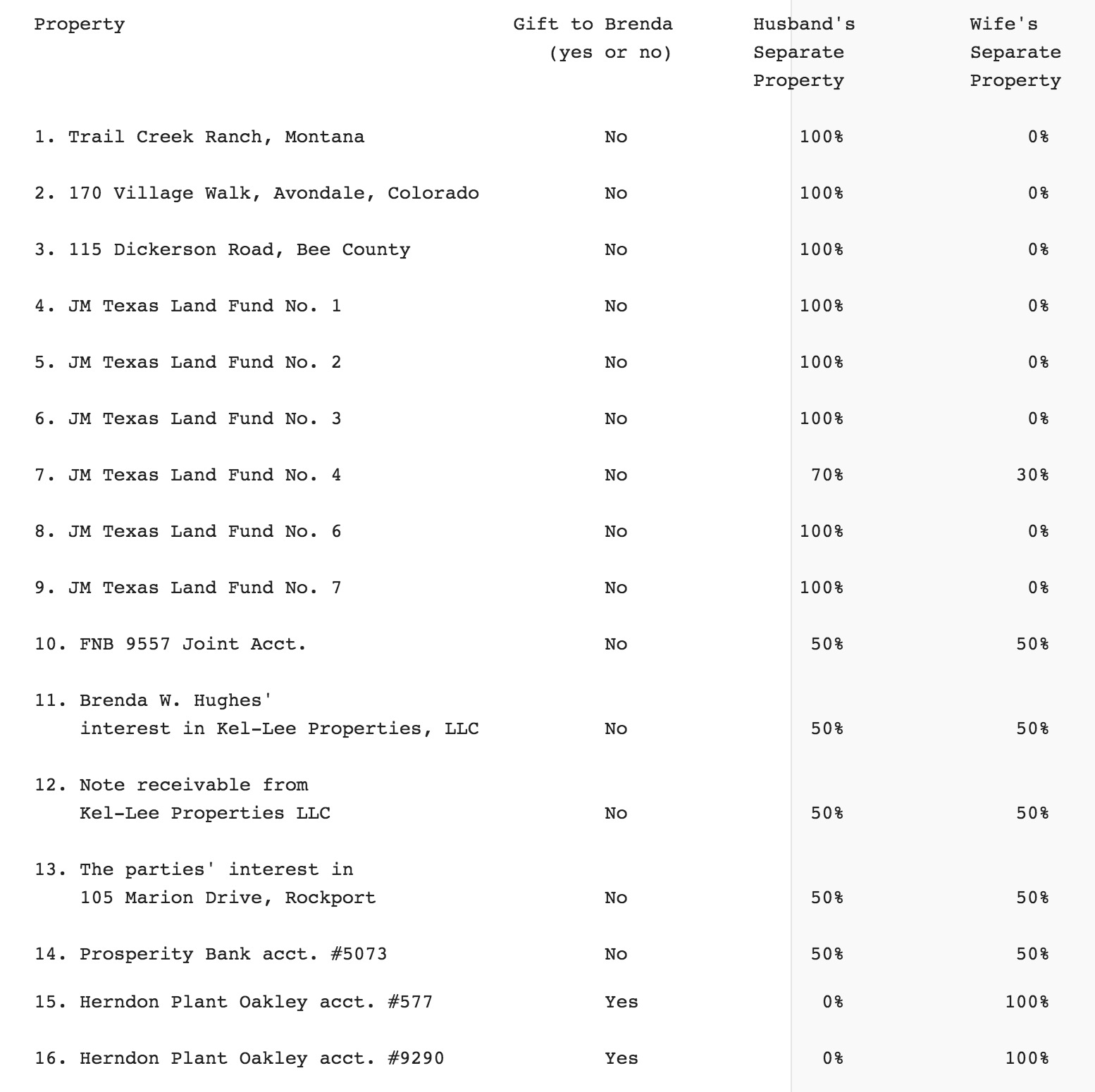 Helpfully, the case includes two prenuptial agreement provisions that were actually interpreted by the court of appeals, which concluded the provisions to be unambiguous and enforceable:

The parties will have the option, but not the obligation, to acquire assets together in their joint names. If the parties jointly acquire assets following their marriage, they will each own an undivided interest in the jointly acquired assets as their respective sole and separate property in an amount equal to the percentage of their respective contributions toward the purchase of the assets. If the parties jointly acquire assets, and to the extent legal title to any or all of the assets can be perfected in their joint names, such as title to an automobile, boat, or real property, they will obtain title in their joint names. However, even though title to an asset acquired by the parties is held in their joint names, the percentage of ownership of such an asset will be controlled by the provisions of this article, and the taking of title in their joint names may not be interpreted to mean that each party has an undivided 50 percent ownership interest in jointly acquired assets. . . . Jointly acquired property may not be deemed to be community property but instead will constitute each party’s separate property in proportion to that party’s contribution to the purchase price; provided, however, that if there are no records verifying the amount of each party’s contribution toward the purchase of an asset, each party will own an undivided 50 percent interest in that asset. If the evidence of title reflects both parties’ names, the parties will own that property as joint tenants with right of survivorship.

The case also provided the elements necessary to prove that a party gifted something to another:

Ultimately, the Court affirmed that any transfers of money from Dan’s accounts, by Brenda to her own accounts were actual fraud.  As such, these transfers were not considered gifts, and Dan was awarded all of the funds that were transferred by her to herself.

Perhaps the winning strategy in this case by Dan’s lawyer was the employment of the tracing expert.  It does not appear from its context that Brenda hired her own economic expert to attest to the movement of funds in her favor as Dan had in his.

To download a printable PDF of the case, you can do so here: