The husband, by agreed decree of divorce, said he would pay the wife $257,220 as part of their division of assets.

He was supposed to pay this total amount by paying her in monthly installment payments of $4,287.00 per month, unless the balance was paid in full.

But, he failed to pay her.

So, she filed a petition to enforce the decree, which is a document and procedure that is used to request the court to punish a person for not following a court order.

She went to a hearing where the judge learned that he had not paid her as ordered.

The Judge agreed that husband had violated the court order.

The Judge ordered that husband be sent to jail.

The husband, from jail, hired a lawyer to petition for writ of habeas corpus.

This is essentially just how a person formally objects and appeals the wrongful imprisonment of a body.

So, the rule is that a person cannot be put in jail for not paying a debt.

However, the Texas Family Code section 9.012 states that the court may enforce by contempt only debts for “a sum of money in existence at the time the decree was rendered; or a matured right to future payments. . . .”  See TEX. FAM. CODE ANN. §9.012. 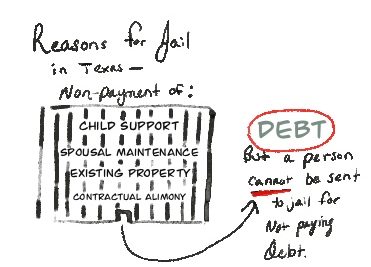 Case Cited In This Post.pdf

This case is here in the event that you need to print it for a hearing.