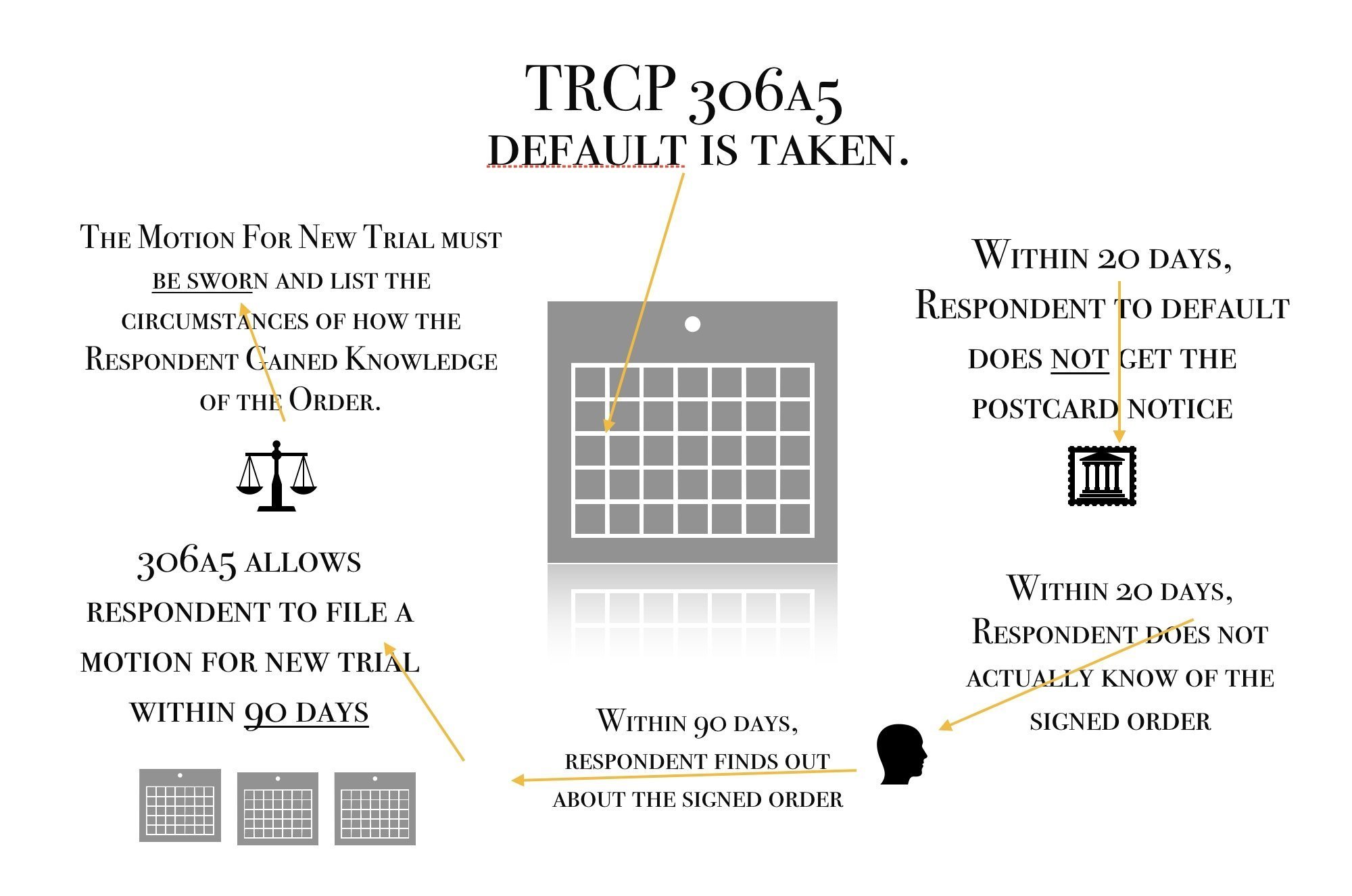 RULE 306a. PERIODS TO RUN FROM SIGNING OF JUDGMENT

1. Beginning of Periods. The date of judgment or order is signed as shown of record shall determine the beginning of the periods prescribed by these rules for the court’s plenary power to grant a new trial or to vacate, modify, correct or reform a judgment or order and for filing in the trial court the various documents that these rules authorize a party to file within such periods including, but not limited to, motions for new trial, motions to modify judgment, motions to reinstate a case dismissed for want of prosecution, motions to vacate judgment and requests for findings of fact and conclusions of law; but this rule shall not determine what constitutes rendition of a judgment or order for any other purpose.

2. Date to Be Shown. Judges, attorneys and clerks are directed to use their best efforts to cause all judgments, decisions and orders of any kind to be reduced to writing and signed by the trial judge with the date of signing stated therein. If the date of signing is not recited in the judgment or order, it may be shown in the record by a certificate of the judge or otherwise; provided, however, that the absence of a showing of the date in the record shall not invalidate any judgment or order.

3. Notice of Judgment. When the final judgment or other appealable order is signed, the clerk of the court shall immediately give notice to the parties or their attorneys of record by firstclass mail advising that the judgment or order was signed. Failure to comply with the provisions of this rule shall not affect the periods mentioned in paragraph (1) of this rule, except as provided in paragraph (4).

4. No Notice of Judgment. If within twenty days after the judgment or other appealable order is signed, a party adversely affected by it or his attorney has neither received the notice required by paragraph (3) of this rule nor acquired actual knowledge of the order, then with respect to that party all the periods mentioned in paragraph (1) shall begin on the date that such party or his attorney received such notice or acquired actual knowledge of the signing, whichever occurred first, but in no event shall such periods begin more than ninety days after the original judgment or other appealable order was signed.

5. Motion, Notice and Hearing. In order to establish the application of paragraph (4) of this rule, the party adversely affected is required to prove in the trial court, on sworn motion and notice, the date on which the party or his attorney first either received a notice of the judgment or acquired actual knowledge of the signing and that this date was more than twenty days after the judgment was signed. 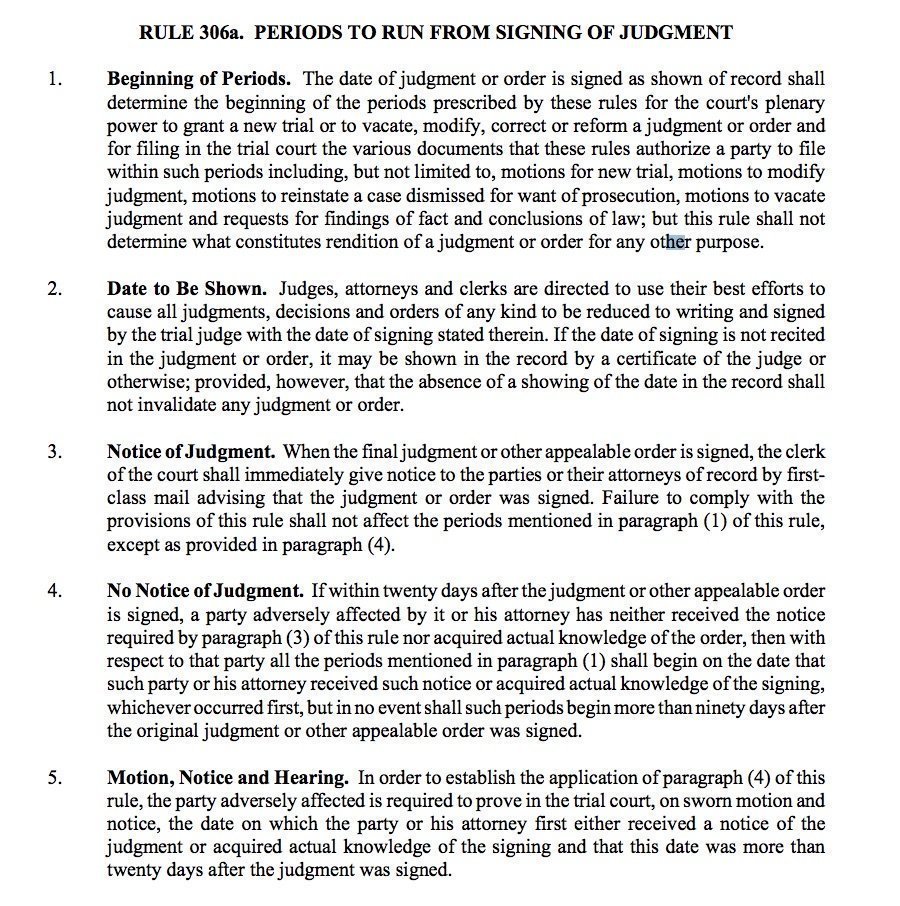 What Does it Mean in Practical Application?

Most practitioners know that you can easily file a Motion for New trial in Texas within 30 days of the date of the judgement.  And, we find that Motions for New Trial are often won on the basis of appeals to sympathy and equity with the court.

But, what happens if your client comes to you wanting to reopen the case more than 30 days after the date of the judgement?

You will have to be able to show that your client did not, within 20 days of the order:

1. Receive the postcard notice of the judgement; OR

2.  Receive actual knowledge of the signing of the order.

If actual knowledge of the signing, or the postcard are not received, THEN, you can toll the time for filing a Motion for New Trial for up to 90 days from the date of the judgement being taken.

As per the language of 306(a)5, the only manner in which you can properly do this is by filing a specific type of Motion that is sworn and makes a prima facie showing of being able to meet the requirement of 306(a)5.

This means that you need to be careful about how to draft the motion.  The face of the swon Motion must list the facts upon which the client gained actual knowledge of the signing of the judgement.

If you find yourself in the midst of a case dealing with 306a5, you will find yourself asking– how is actual knowledge defined?  The reason is that a client may have somewhat known about the case, but claims not to have seen the actual signed judgement itself.  There is very little jurisprudence on the topic.  Two cases have come out to define “actual knowledge”.

Regarding the meaning of actual knowledge, the case states:

In essence, De La Fuente contends that he did not receive notice of the order until he received the order and became aware of its contents. However, rule 306a does not require knowledge of the contents of the order. See Tex.R. Civ. P. 306a(4)-(5). Rather, the rule concerns when the party or his attorney either received notice of the judgment or order or when the party acquires actual knowledge of the judgment or order itself. See id.; Gillis, 741 S.W.2d at 365; Nathan A. Watson Co.,218 S.W.3d at 800. Instead of establishing a prima facie case that he lacked timely notice which would invoke the trial court’s otherwise-expired jurisdiction for the limited purpose of holding an evidentiary hearing, De La Fuente’s affidavit conclusively establishes that he acquired actual knowledge of the judgment on December 18, 2008, only fourteen days after it was signed. Because De La Fuente obtained actual knowledge of the order within twenty days after the judgment was signed, he cannot invoke rule 306a. See Tex.R. Civ. P. 306a(4)-(5); Gillis, 741 S.W.2d at 365; Nathan A. Watson Co., 218 S.W.3d at 800. Accordingly, the trial court abused its discretion by granting De La Fuente’s motion 345*345 for new trial after the expiration of the trial court’s plenary power.

The only other case we could located definining the meaning of actual knowledge in this context is:

The judgment at issue in this case was a divorce decree entered as a default judgment. Appellant acknowledges being served with the suit, but contends that appellee tricked him by having sexual intercourse with him on that day and telling him that she intended to dismiss the divorce. This explanation for why he did not file an answer does not bear on establishing a 306a notice date for receipt of notice of the judgment, however.[2]

Appellant also argues that it is undisputed that he did not receive a copy of the judgment until November 7, 2006. However, Rule 306a refers to receipt of notice or actual knowledge of the signing of the judgment, not receipt of its contents. According to appellant, appellee told him that the divorce was final on October 12, 2006, and that a copy of the decree would be mailed to him. Appellant says he went to the courthouse, but was not given a copy because it would be mailed. He waited until November 7, 2006, before returning to the courthouse and obtaining a copy of the judgment.

This means that if a person knows about the existence of the judgement, regardless of whether they have an actual copy of it, that this knowledge is enough.

However, in practice application, at least in Bexar County, we find that judges tend to be inclined less by the technical meaning of the law, and are inclined to agree with the sympathetic side of the arguement.  So any bit of evidnece you can present that would show no actual knowlege was gained may be, in certain courts, enough to toll the deadline.